Skip to content
While the cats are away…
With the bulk of the Bestbuy team recovering from a successful Buy & Sell 2015 in Bermuda, the graphic designers took some time to play.
For today’s ‪#‎ThrowbackThursday‬, we’ve compiled a list of our favourite automotive features: the fonts! (What? You were expecting something else?) 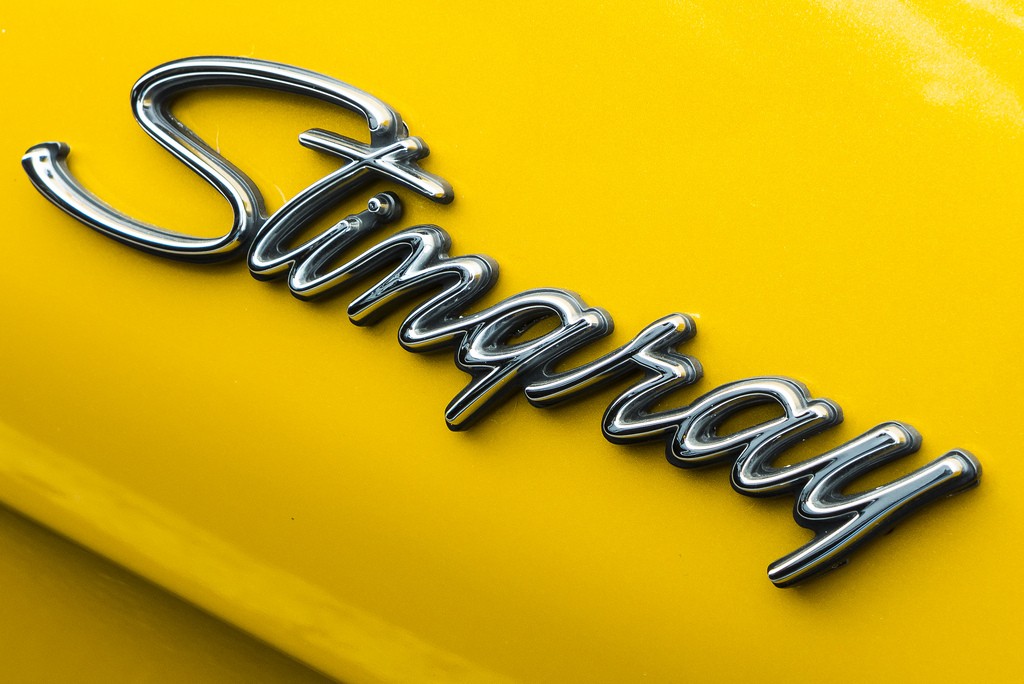 Our selection criteria were pretty simple. The only absolute must was that it had to be vintage for our Throwback Thursday feature. We also looked for the iconic typefaces that are instantly recognizable. A few were chosen purely because they were so unique.
This list could have gone way beyond 20 because there have been so many great branding statements made in automotive history, but we had to stop somewhere. There is also no Ferrari. We know, it has never changed and it’s the mother of all car icons. In fact, it’s so iconic that we figured you could get a pretty decent picture of it in your head without us telling you what it looks like.
Lastly, before we begin, there is no particular order here; it was hard enough narrowing down our choices, forget choosing a favourite!

The image source is noted and linked to from the image wherever possible.

The Malibu may not be the most jaw-dropping artistic statement, but it says what it needs to: “let’s go to the beach”. That trailing “u” almost wants to lead you there and the sculpted edge of the chrome adds a different feature from other similar designs.

Can chrome be cuddly? There’s just something huggable about this Opel Kadett typeface that appeals to our kinder, gentler side. Might also be the Cadet with a ‘K’ and a double ‘t’ that makes us think of bubblegum and happy times.

Speaking of happy times, if you happened to forget that psychedelia happened, well, it did. This is proof.

Originality counts. We really like the Le Baron’s use of drop caps. Added to the swishy elegance of the script, this is a unique vision of the standard scripted style.

Normally when we think of the Impala we think of the animal emblem; however, the script of the name isn’t too shabby either. The stylized capital ‘I’ is our favourite part of this classic logo. 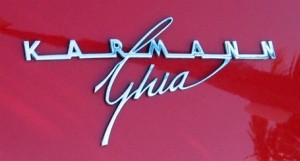 A logo so far ahead of its time, we had to check that it was really vintage. The Volkswagen Karmann Ghia was introduced in 1955 and with it came this typographical wonder of the world. We wonder if ‘volks’ from the 50s thought they were experiencing a little “Back to the Future” magic when this striking typeface combination was introduced.

Continuing with the script/sans serif combo which is still a classic typeface style for modern designers, we selected the Corvair Corsa. It’s an engaging amalgamation of sleekness, elegance, and adorableness (?!). A tough look to pull off for cars and for people! 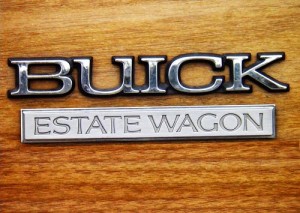 As one designer said “it belongs on a bottle of wine”. It’s the all caps “Estate Wagon” we’re after here, set off by the vintage wood grain. Wait, did somebody say wine? 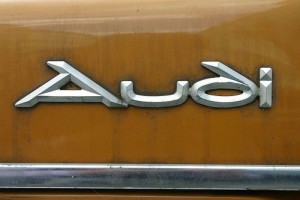 Oh, Audi, how you tempt us with your freaky backwards angles and squashed-down ovals. Recent versions of the Audi logo feature a more upstanding look with perfect circles, but this slightly flattened version from a 1970s 100 LS is just too odd to ignore. 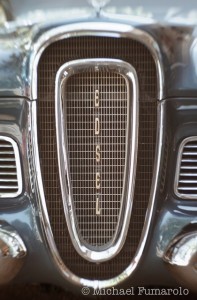 Vertical lettering is a rare thing and ought to be celebrated when you find it. This 1958 Edsel logo takes advantage of the tall, narrow front grill by stretching down the centre. The typeface itself is also rather quirky.
Scripted fonts are pretty common for cars, as you may have noticed from this list, so when a scripted logo finds a way to be unique it’s worth a long look to appreciate it. The thickly styled script of Alfa Romeo is doubly cool thanks to its artistically asymmetrical placement on this large 1931 grill. Those Italians…have they ever not been chic?
Sometimes all it takes is a pair of characters placed ‘just so’ to get our designer imaginations going. We love the way the fat-bottomed “8” nestles in to the sharply angled “V” on this Ford.
The 1930’s Auburns had one of the most distinctive numbering styles we have ever seen. It could be in a design book today and we would never know it wasn’t brand new. 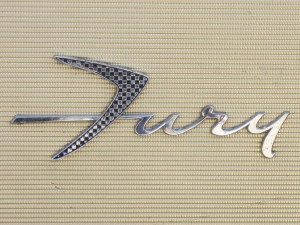 This atomic-age Fury logo is notable for its use of a textured boomerang image mixed in with the typeface.
This freaky 1963 Chrysler Imperial logo looks a bit like something from outer space. Add it to that “deathstar-esque” trunk emblem and you’ve got yourself an alien invasion. 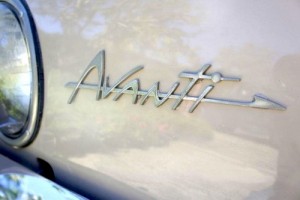 Yup, the aliens have definitely been here. They left us their car. 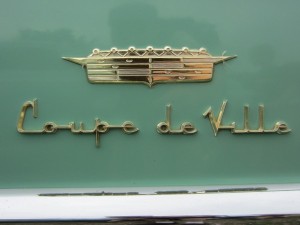 Coupe de Ville. Gold-plated, kooky, and custom. In the world of script logos, this typeface is in a class by itself.

And then, sometimes, it’s what’s not there that makes a typeface stand out. This Triumph phont has a nice, classy, upright look, but it’s the spacing between the letters that makes it so triumphant. 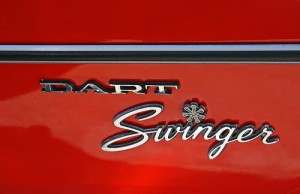 Were it not for the goofy asterisk dotting the ‘i’ of this Dart Swinger logo, we might have passed it by. The extra special ornamentation marks this as completely vintage. 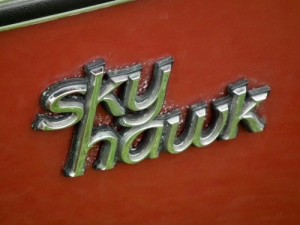 In the realm of vintage typefaces, ordinary actually stands out. In an all lower case, understated serif font, the “sky hawk” caught our eye. It’s not a big, brash eagle or a showy peacock. It’s just a reliable little sky hawk. If that’s the feeling Buick was going for, they totally nailed it with this font.

Choosing a Corvette typeface is like choosing your favourite child; we pretty much like them all. Chevrolet has changed the fonts frequently over the years, so it’s hard to believe that each one is iconic in its own right. Nevertheless, we had to pick one and we went with this 80s ‘sans serif’ typeface because it was the biggest departure from the typically scripted versions. And it reminded us of our own childhoods.

Okay, we really couldn’t choose, so we cheated by throwing in another Corvette, this time it’s the distinctive “Stingray” script written, we’re pretty sure, with molten metal and a pastry piping bag directly onto the vehicle. This version happens to be from the year one of our designers was born. Sentimentality wins again.

And that’s our list! Looking at all these gems, the typeface designers of the past seemed to approach car labeling with a freedom and experimentation that their modern counterparts just can’t seem to achieve. And that’s a real shame. With the technology and experience available to us, we could do a lot more. (I’m looking at a laptop at the moment and the glowing LED branding on the back has me thinking a subtly lit car logo might be kind of awesome, wouldn’t it?)
*Yes, there are 22. We really like good fonts.
Scroll Up